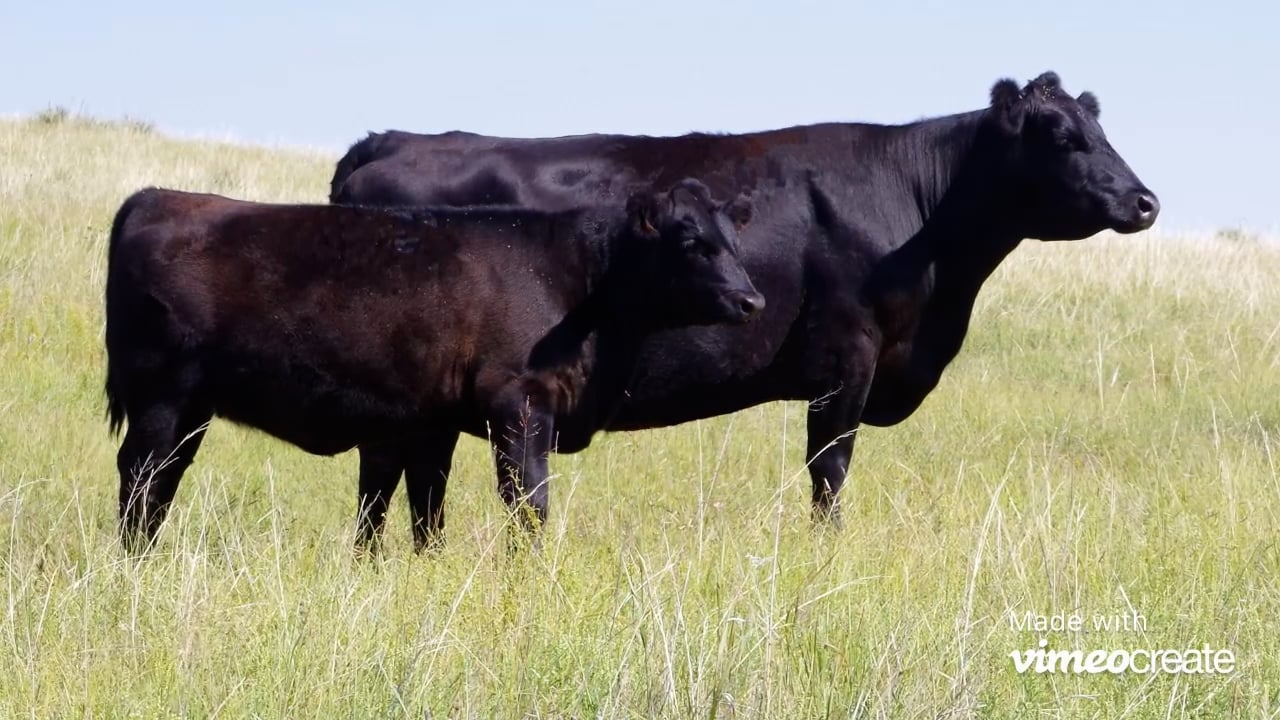 E.D. Angus is dedicated to developing a cowherd that produces outstanding, moderate-framed, efficient bulls and females that have great maternal and carcass traits, outstanding performance, and gentle dispositions.

Ashby –Just over 30 years ago, Clint Hebbert and his brother Pat, decided to raise cattle in a joint venture on some leased land near Ashby, NE, which is located on the western edge of the Nebraska Sandhills. Clint and Suzy were married in 1991, at that time they had 12 head of commercial crossbred cows and bred heifers. Their sons Ed and Joe joined them in the operation 1993 and 1996, respectively.The Hebbert’s added their first registered Angus cows in 1993 when they purchased three females on Vance and Connie Uden’s mature cow sale. They returned to TC Ranch again in 1998 and selected five more cows. In the ’90s, females were also added from Hoff Scotch Cap & Bon View Angus in South Dakota. Additional females were selected from the Russell Angus dispersal, Minert-Simonson Angus, and Marcy Cattle Co. in Nebraska.  These registered cows served as the foundation of their herd. Over the next sixteen years, they kept only their top-performing heifers as replacements and grew their herd to current numbers of 115 cows and bred heifers. In 2017 & 2019 they once again added genetics on the female side with the purchase of females from Baldridge Tiedeman Angus. Along the way, they purchased bulls from the top end of Nebraska producer’s sales such as Minert-Simonson Ranch, Vin-Mar Cattle Co, Kraye Angus, and A & B Cattle. They frequently collect semen on their herd sires and A.I. to their herd bulls as often as they select semen from sires in bull stud lineups. They have also utilized Embryo Transfer in their operation, selecting some of their top producing females to flush, it is on a small scale basis, but this task has been scaled back this last year due to limited time available to successfully manage it. Their goal is to produce broody, thick, deep ribbed females with lots of volume. Their operation is a spring calving herd, and they try to run every cow and heifer through the A.I. chute, beginning the first week in May and finish that A.I. program by June 1st if possible. Heifers are synchronized while cows are A.I.’d on natural heat the first 10 days of the breeding season and then synchronized in two groups.   The calf crop is not creep fed, they want the calf weaning weights to be a true reflection of the calves’ genetic potential, their dam’s milking ability, and what Mother Nature provides in the Sandhills forage. Steer calves are usually marketed in October and replacement heifers are sorted in the fall. Bulls are monitored on a feed test at the ranch, while heifers are grown on 2-3 lbs. of protein supplement/head/day. Heifer numbers are sorted again in January and later-born heifers are sold then as replacements at sale barn auction.In the early years, E D Angus bulls were marketed by private treaty. Then a bid-off procedure was added to the private treaty bull sale. In 2015, the sale became a production sale where bulls and replacement heifers were offered in a live auction. The sale is now annually held on the third Sunday in March. They celebrated their 20th sale this year. The Hebbert’s have benefited from membership and involvement in the Nebraska Angus Association. They exhibited a pair of bred heifers in the 2005 Pen show, winning reserve champion pen but more significantly that pair of heifers topped the sale that day. They have participated in the annual tour, exhibited cattle at Husker Harvest Days and they try to attend the year-end banquet annually. Suzy served two terms on the Association board as the West district director. Essentially, they feel the networking and contacts with members across the state, both at the Nebraska annual meeting and the National Angus Convention, have provided a base from which to fine-tune and improve their program.Throughout the years, E D Angus was a four-person operation. Clint and Suzy’s sons Ed and Joe played an integral part in the workload. As they left home, went to school, and entered the workforce in their chosen fields, it is now basically back to a “Mom and Pop” management style. Ed and his wife Kate live in Clay Center, NE where he is employed with UNL Forages department at the Meat Animal Research Center. Joe and his wife Makala live at Stuart, NE, and farm with her family. Each couple periodically makes it home to help with major events such as the sale or spring branding. Clint and Suzy don’t plan on expanding their cattle numbers much, preferring to concentrate on quality, keeping in mind… ”If you raise top-quality cows, exceptional bulls and heifers will be born to those cows, and your herd improves with each new calf crop”.